A legumen typical of the Northern Campania (in the area of Vairano), with SlowFood Quality Certification.

A legumen typical of the Northern Campania (in the area of Vairano), with SlowFood Quality Certifcation. The product is preserved in a solution of salt and water. It has optimal nutritional properties, because it is abudant of proteins, fibers, minerals and devoid of cholesterol and gluten.

The variety
The giant lupin of Vairano, also called lupinone, is an ecotype belonging to the leguminous family. The plant has an erect habit, which can reach up to one and a half metres in height, and emits up to three inflorescences that give rise to the pods, which contain 3 to 6 lupins. The lupins are flattened, beige in colour, round in shape, with a pasty consistency and a delicate flavour.

The territory
The cultivation area includes the municipalities of Vairano Patenora, Tora and Piccilli, Pietravairano, Caianello and Teano, in the province of Caserta. The territory is mainly flat and is crossed by the Volturno River. The climate is Mediterranean, with hot, dry summers and mild winters. The soils are fertile because they are of volcanic origin, given the nearby presence of the extinct volcano of Roccamonfina, and are therefore rich in trace elements and minerals.

Cultivation
The lupin seeds, preserved by the Presidium producers, are sown in autumn in rows or by scattering. The soil is superficially ploughed and weeds are removed manually or by mechanical means. Irrigation and fertilisation are not carried out. No synthetic chemicals are used to control pests and diseases. As a leguminous crop, lupins are an ameliorating species, so they go well in rotation with depleting species such as cereals. Crop rotation has the objective of preserving soil fertility, limiting soil fatigue problems and improving crop quality.

Harvesting and processing
In summer, when the plants are dried, threshing is carried out and the seeds obtained are placed in the sun, to complete drying, for 2-3 days.

In order to be consumed, the lupins must undergo the dehulling process. This process is carried out by the producers who, after rehydrating the lupins in water for 24 hours until they swell, immerse them in boiling water for about ten minutes and leave them there for five to seven days, changing the water regularly. This is followed by salting, the last stage before consumption.

The narrative label is a Slow Food project and tells the story of the product, who produces it and the entire supply chain. 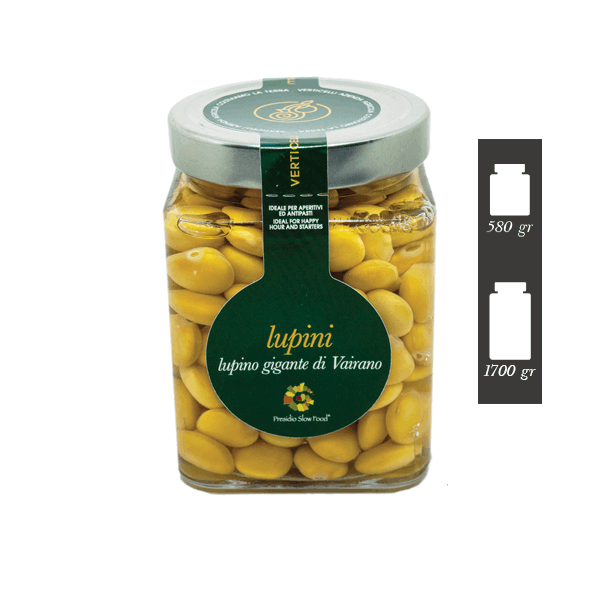 Ideal for:
SNACK OR FOR ENTREÉ. 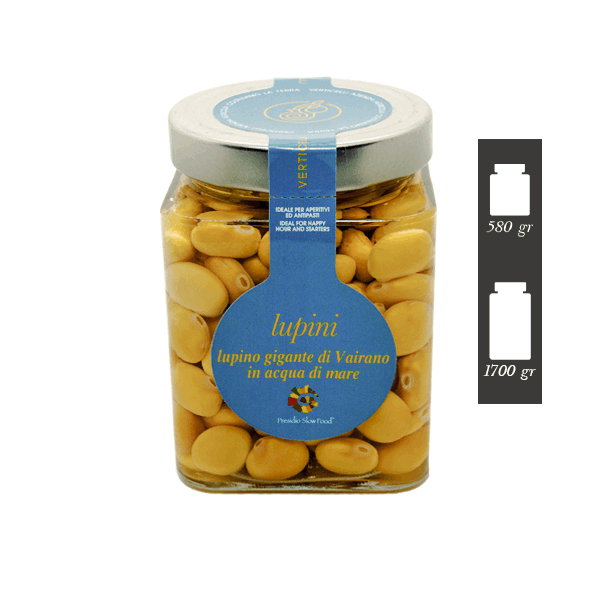 Ingredients:
LUPINS, SEAWATER.
Ideal for:
SNACK OR FOR ENTREÉ.